I made a Self Balancing Robot in 10 days! 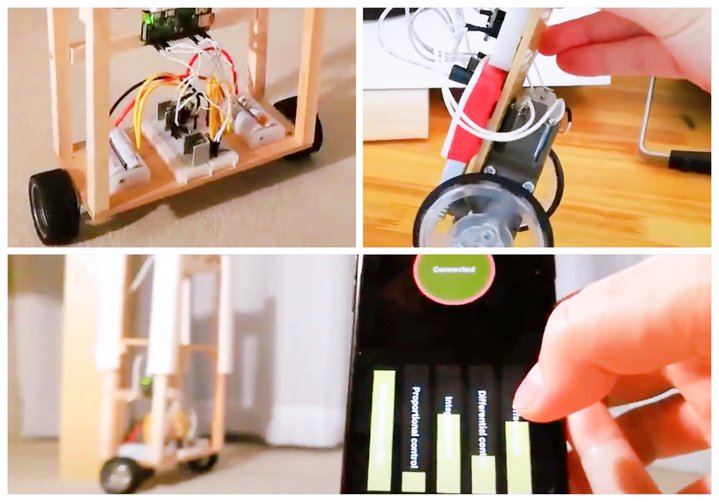 I made a Self Balancing Robot in 10 days. I will explain how I made it.

I chose a Raspberry Pi zero. And I use SSH, SCP on Mac terminal to transfer the Robot program and to control it. Here, I don't explain how to setup a Rasbian OS.


A journey of a thousand miles begins with a single step

I don't know how to control motors with PWM. So I started with a very simple step before controlling motors. That's a blinking LED. Isn't it very very easy?

Then I wrote a simple program that blinks LED 5 times every second.

I used PWMLED in gpiozero to control LED brightness. PWM is pulse-width modulation, is a method of reducing the average power delivered by an electrical signal, by effectively chopping it up into discrete parts.
I could see a shape like a measuring worm by my oscilloscope. Now I'm ready to control the motor with PWM.

I went to Akizuki-Denshi at Akihabara to buy DC motor drivers, but it was close for Obon week. Next Sengoku-Densho was open, so I bought BD6211F.

I learned that controlling DC motors with driver is very easy. To control the motor is sending signals to FIN and RIN of a driver. Then we can control forward, backward and brake with PWM in a range 20kHz to 100kHz.

I choose the TAMIYA's double gearbox as the power of my Robot. This module can move the left and right tires independently. If you want to make a Robot just stand, you can choose a single gearbox too. 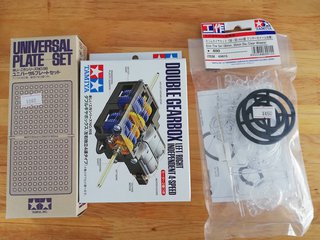 Anyway I assembled it without any sensor. I loaded the battery on the Robot and moved it just forward and backward with the motor drivers.

To get values of acceleration from MMA8452Q needs to I2C communication. Fortunately I had use I2C in the previous article, so it wasn't so difficult for me. But one point needs attention, is the sensor's SDA connects to the GPIO number 2 of the Raspberry Pi and SCL to the 3rd. It is GPIO numbers, not physical numbers.

The graph below shows degrees of the accelerometer when it is rested on a desk for 3 minutes. 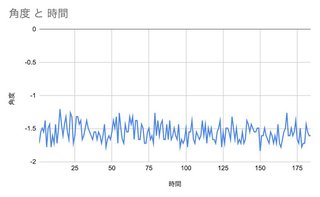 It is not centered around 0 degrees because the desk is already slightly tilted. So it goes back and forth between plus and minus 0.5 degrees around -1.5 degrees. The angles could be calculated using arcsin or arctan2. 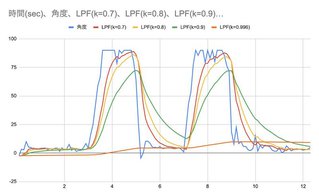 Well, I tryed whether the Robot was vertical with the accelerometer and moved the Robot forward and backward. 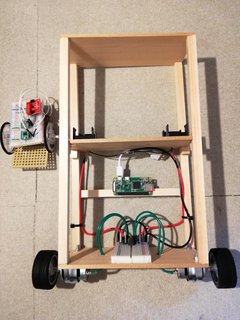 I reworked my Robot's framework with wood. I chose a thicker tire, and RS-385 motors that's 9V power supply. I thougt the Robots could move without gearbox, but it was failed. The motors doesn't have enough torque to move the Robot without no gears.

So I changed the motors to geared motors. 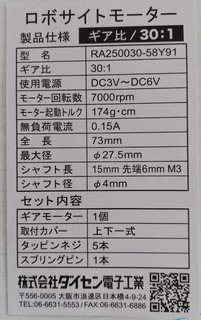 Wonderfully, the geared motors moved Robots so powerfully. I was confident of the success of this project.

By the way, I was faced with a problem that my Robot program stopped often. The following error is issued when the program stops.

The error is likely to occur when the direction of the motors rotation is reversed. I tried to attach a 100μF capacitor to lower the output impedance of the power supply, but the Robot had still the error. In the first place, the power supply for the motors and Raspberry pi are separate, so there seems to be no relation. 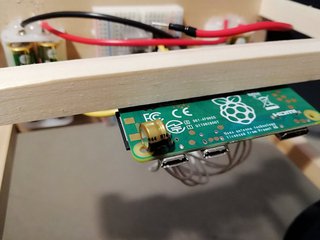 By writing exception handling as follows, the program is no longer forcibly terminated.

However, the error itself has not been resolved. I thought that the noise caused by the back electromotive force of the motors might be related to the error. I tried to put 0.1uF bypass capacitors in the motors. 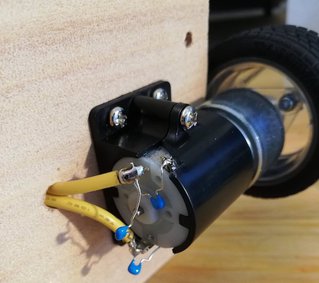 
Use a gyroscope and an acceleration sensor with BOSCH BMX055

Now, the graph below shows degrees of the gyroscope when the tilting process is repeated 90 degrees. 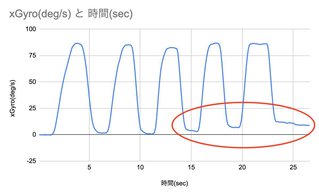 I found that the gyroscope is easy to use for instantaneous angle detection. However, since it drifts with time, it does not seem to be suitable for absolute angle detection. Therefore, it is necessary to correct with the acceleration sensor to remove the drifts.

Like the previous graph, the next graph shows angles.
However, the values are calculated using the complementary filter. The value of k is set to 0.9. 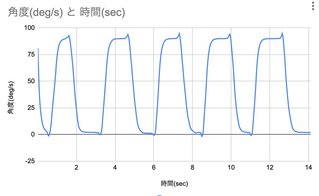 The drifts of the gyroscope has been removed brilliantly.

I tried to make the Robot stand up like this. Although it is still unstable, the success of the project is coming soon.

It was difficult to make the Robot stand stably. Just then, I learned about PID controller from my friend. And I found that PID controller can be programmed very easily. I wanted to know the mechanism of PID controller. So I bought a control engineering book and studied it.

Well, PID controller is an abbreviantion for Proportional-Integral-Differential Controller. Until now I have used only proportional control for my robot. That is why the robot did not stand up stably. By using the integral, it becomes strong against external force. By using differentiation, machine vibration can be smoothed. This video explains the PID controller in an easy-to-understand manner.


As I said, PID control programming was very easy. On the other hand, it took time to adjust the PID parameters. I spent a few days adjusting it. Finally, my robot was able to stand stably.

The middle battery is for fine adjustment of the center of gravity. If the center of gravity shifts, the robot will move forward. The balance of the robot seems to be important. Also, the complementary filter coefficients, the timer interval of the program while loop, and the PID parameters are sensitive to each other, so it was difficult to optimize. It is useful to know how PID controller works.

I started this project as if it were my summer homework. It took about a month, but it was completed in just 10 days. I would like to thank the various people who posted how to make them on the web site. I hope my article is also useful for someone.

You can see my robot program source here. Thank you.